Type in your search 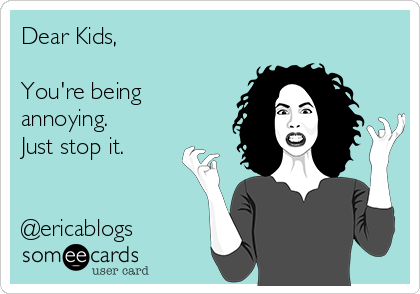 I hate to begrudge my kids being kids. But OHMYGOD, why are they SO annoying sometimes? If it’s not the annoying noises coming from their bodies, it’s the mess. Or the whining. Or the fighting. Or the pokeyness. (I know that’s not a word per se, but SO SLOW.)

Tell me if you’ve encountered any of these endearing traits from your children:

My sweet 7-year old daughter, God love her, is constantly either whistling or humming or singing some made-up song. It was cute for, like, the first 17 minutes — but that was four years ago. Make. it. stop!

My eldest son, bless his sensitive soul, whines about everything. And the absentminded clickety-clicking noises he makes with his tongue make me want to rip my ears off some days.

The youngest boy turns every toy into some weapon with machine gun special effects. Despite our every attempt to dissuade or distract him — we do not have toy guns or condone gun play — it doesn’t matter. All day, all I hear is him emphatically blowing shit up. He’ll turn paper, Lego or his hand (in the middle of church, no less) into his weapon of choice. It’s gotten to the point where I say, “Oh, are you spraying out cotton candy from that?” Stop it now.

Sniffling. Always with the sniffling. Whether it’s a cold or allergies, whatever. GET A GODDAMMED KLEENEX! Also, let’s not forget about burps and farts which are always “on accident”, completely inappropriate and totally hilarious. To them. By the way, who says, “on accident”. It’s BY accident. Annoying.

And then, of course, there’s the fighting. The voices when they’re arguing with each other, on a loop, are enough for me to pack my bags. I’d love to just let them have it out, but, you guys, I can’t take it.

Oh! And how about the nervous laughter?! You know, when they get so riled up and they’re inevitably doing some silly shit and laughing giddily to the point of hysterics and you know. You just know something is going to go sideways.

You can always tell when a kid has passed through a room because he or she has inevitably left a trail of toys-paper-clothes-books-crayons behind them.

In the mornings, their rooms look like a tornado has passed through. They still don’t make their beds routinely, no matter how many times I’ve gently suggested it. (See? Gentle suggesting does not work!) Pyjamas lie, inside out, on the floor, or hang off the bunk bed ladder, or are tossed back onto the bed, or — and this is my personal favourite — they make their way down to the living room couch. And the toys — because the boys have been up since the Goddamned crack of dawn — are strewn about, forgotten.

They get home from school and — it’s sweet, really, how they pretend not to know the routine — backpacks are dumped in the middle of the front entrance; jackets look as though they were launched at the hooks on the wall, missed and left where they landed; footwear is everywhere. So then I turn from Happy Mommy into Harpy Mommy with the, “Guys, your BACKPACKS!” and, “WHERE DO THE LUNCH BAGS GO?” and, “WHY am I stepping on granola bar crumbs? We eat AT THE TABLE!” (Table manners is a whole other matter.) The neighbours must think I’m a nut job.

Then we’re dealing with the after-school shedding. Shedding of layers of clothing, socks especially, which must always be left behind couch cushions — but not as a pair, no. That would be too easy. Shedding of the hoodies or sweaters which are flung over chair backs or arm chairs. Along with the discarded pyjamas from that morning, it’s a veritable laundry party waiting to happen. Then the homework explodes. All this and they’ve been home for seven and a half minutes. Still four hours till bedtime.

And never mind the days when they’re home all day. Then it’s a steady chorus of: “Guys, tidy up, please,” or some variation thereof, on repeat. Seriously, though, enough with the mess, already.

Ok, what is the deal with the slow mo’? I’m going to use my boys as an example because, all things considered, the girls tend to be a little more on the ball. My boys. They go through the day on fast-forward. The energy they have, especially the youngest, is enviable. Running around, upstairs, downstairs, in and out. Biking, kicking the soccer ball, swinging on swings, playing catch or shooting hoops. Jumping or zooming around on the scooter.

And then: “Boys, could you please get your pyjamas on?” (See also: reactions when asked to clean up the basement or clear the table or do homework.)

Suddenly — SUDDENLY — it’s, “My leg (or arm or eyeball) hurts,” whining, of course. Or, “I’m tired,” as they crawl, at a snail’s pace, up the stairs. Then you might see one lying at the top of the stairs, clearly having just expelled every remaining ounce of energy getting to the summit, and, whining, again, “I can’t get up.”

Also, most ironically, all four almost always end up in the bathroom at the exact time to floss and brush their teeth. Huh, imagine that timing? (Again, this traffic jam scenario happens in almost every circumstance.) If you’re thinking that’s a recipe for disaster, you’re right. Perhaps, I should have thought to suggest each child begin with a different part of their routine (in this case: brushing teeth, putting on pj’s, setting out clothing for the next day) so as not to be in each other’s way. Oh, but wait! I DID. Perhaps I suggested it too gently.

Oh, Dear everything-that-is-good-and-holy. Give me strength.

Bedtime then proceeds to take 45 minutes as I coax and prod and plead for them to just GET THEIR SHIT DONE.

Is it too much to ask to just pick up the pace, people? Am I crazy to want my kids to act normally and responsibly all the time — the way I know they’re capable of doing? Should I just tune out their crazy noises and awkward annoying shit knowing they’ll outgrow it before long? Did I miss that chapter in “What to Expect When Your Kids Are Being Assholes” or is it just kids being kids?

Tune in next time for How My Kids are Like Sunshine and Butterflies.

Erica writes with humour and heart about family, #fit40s and living life in the carpool lane. Part-time banker by day and Netflix-addicted-cake-decorator by night, Erica's in-between time is spent dreaming up ways to ruin her kids' lives. Obviously.

Raising confident teens who say “no” to vaping and other adolescent trends is challenging, but not impossible

This site uses Akismet to reduce spam. Learn how your comment data is processed.

Hi! Thanks for visiting Erica Blogs, my little piece of the blogosphere. This is the place where aging (un)gracefully, day drinking, and dropping all the balls is par for the course. So, pour yourself a glass and let's get to know each other.

Visit Erica's profile on Pinterest.
This error message is only visible to WordPress admins


Error: There is no connected account for the user 8215109 Feed will not update.